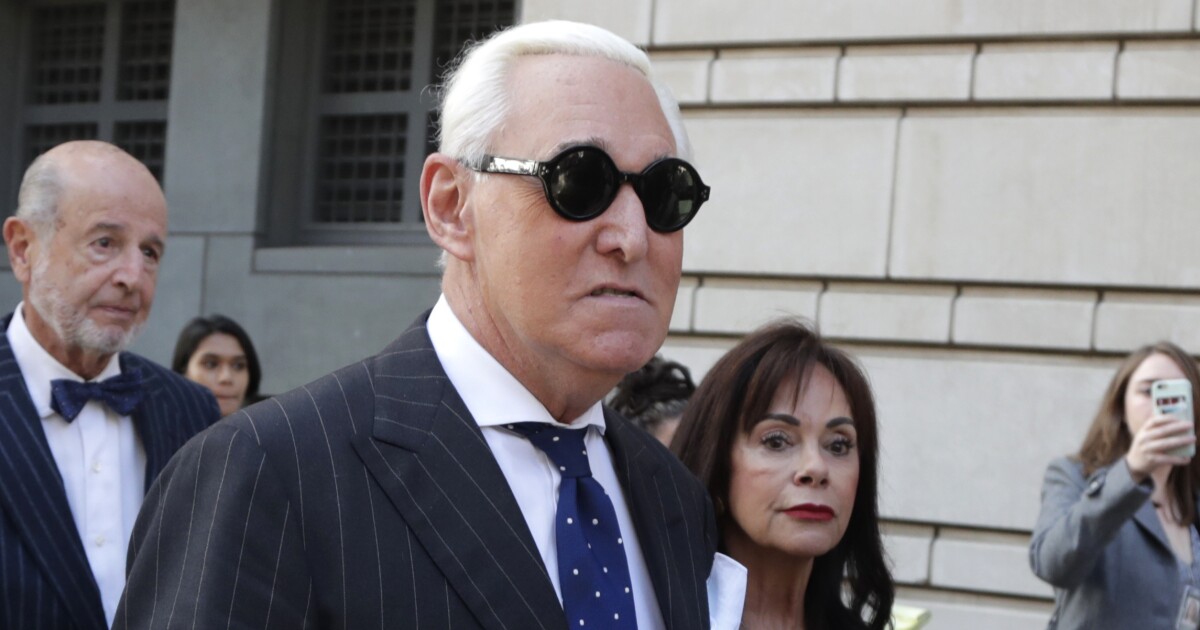 President Trump condemned the Justice Department’s decision to seek a prison sentence of up to nine years for self-described “dirty trickster” and longtime Trump confidant Roger Stone, hinting he may commute the GOP agent provocateur’s sentence or pardon him.

“Disgraceful!” Trump tweeted in response to the news early Tuesday morning, adding, “This is a horrible and very unfair situation. The real crimes were on the other side, as nothing happens to them. Cannot allow this miscarriage of justice!”

This is a horrible and very unfair situation. The real crimes were on the other side, as nothing happens to them. Cannot allow this miscarriage of justice! https://t.co/rHPfYX6Vbv

Stone was found guilty in November on five separate counts of lying to the House Intelligence Committee in its investigation into Russian election interference, in addition to one count that he “corruptly influenced, obstructed, and impeded” the congressional investigation and another that he attempted to “corruptly persuade” radio show host Randy Credico’s congressional testimony.

The two-week jury trial centered on Stone’s apparently false claims of being in communication with WikiLeaks and about his actions taken during the 2016 election and beyond.

The DOJ’s 26-page sentencing memorandum on Monday asked that the judge sentence Stone to 87 to 108 months in prison.

“This conduct was part of an effort to hide from Congress and to craft a false narrative about Stone’s conduct in 2016,” prosecutors said on Monday. “Stone regularly communicated with senior Trump campaign officials — including deputy campaign chairman Richard Gates and campaign CEO Steve Bannon — about WikiLeaks’ plans to release more information that would be damaging to the Clinton campaign. Both Gates and Bannon believed that Stone was providing them with non-public information about WikiLeaks’ plans. Indeed, Bannon viewed Stone as the Trump campaign’s access point to WikiLeaks.”

Stone’s defense attorneys argued in their own 35-page sentencing memo late Monday night that the DOJ had inflated Stone’s offense level, and that the proper sentencing guidelines should be a prison sentence of 15 to 21 months. Moreover, they asked the judge to lower his sentence to just probation, arguing that he should receive a lesser sentence “as a 67-year-old first time offender convicted of serious but non-violent crimes.”

“The facts of this case do not warrant the application of any offense level increases,” his defense team said.

The jury found Stone repeatedly misrepresented and concealed his unsuccessful 2016 attempt at collaborating with WikiLeaks to obtain dirt on then-candidate Hillary Clinton when speaking with Trump-Russia investigators from the House Intelligence Committee in a spin-off case from special counsel Robert Mueller’s two-year investigation.

Judge Amy Berman Jackson, the Obama-appointee who presided over Stone’s trial, will hand down his sentence on Feb. 20.

In a section explaining what they believed was “the seriousness of the offense” Stone committed, prosecutors quoted Alexander Hamilton in the Federalist Papers No. 68, in which he says foreign election interference is among the “most deadly adversaries of republican government.”

“Investigations into election interference concern our national security, the integrity of our democratic processes, and the enforcement of our nation’s criminal laws,” prosecutors wrote Monday. “ Obstructing such critical investigations thus strikes at the very heart of our American democracy.”

“It is against this backdrop that Stone’s crimes — his obstruction, lies, and witness tampering — must be judged,” the DOJ said.

But during the two-week trial, it was never alleged that Stone was actually in communication with anyone from WikiLeaks, and he was never accused by prosecutors of criminally conspiring with Russia or any other foreign actors.

“In the end, the investigations yielded no evidence of the involvement of any American with the Russian government or any agent operating on its behalf to interfere in the 2016 election,” Stone’s defense team said. “It is also undisputed that Roger Stone had nothing to do with obtaining the compromised emails or providing them to WikiLeaks. The information that Stone failed to provide to HPSCI was insignificant in the broader context of the investigation into Russian interference in the 2016 election.”

The lawyers pointed to the sentences of others swept up in Mueller’s investigations: former Trump campaign manager Paul Manafort being sentenced to seven and a half years; former Trump lawyer Michael Cohen being sentenced to three years, including two months for misleading Congress about the timing of Trump Tower Moscow; former Trump deputy campaign manager Rick Gates, who cooperated extensively with the government, getting only 45 days in jail and three years of probation; and former Trump foreign policy adviser George Papadopoulos getting just 14 days behind bars for lying to FBI investigators.

Stone’s attorneys also quoted Credico’s post-sentencing letter to the court, which read in part, “I never in any way felt that Stone himself posed a direct physical threat to me or to my dog. I chalked up his bellicose tirades to ‘Stone being Stone.’ All bark and no bite!”